What is A/B testing?

A/B testing, also known as split testing, involves a process of testing and comparing two different versions of a website or feature in order to see which one performs better.

Versions or variations A and B are randomly presented to users where a portion of users are directed to the first version while the rest to the second.

A statistical analysis of the results of each variation are gathered to see which one performs better; for example, which one received the most clicks, conversion rates and so on. This way, you will be able to check your hypothesis constructed at the beginning of the experiment where the results of your A/B test will enable you to accept or reject this hypothesis.

A/B testing can be done over two quite similar versions with only a small change within the website but could end up making a huge difference, for example, in terms of user engagement and conversion rates.

Let's take a look at an example…

Imagine we want to test out whether adding buttons such as 'add to cart' and 'choose size' for easier navigation such as in the image to the right- known as the 'experiment version' will result in more clicks and purchases as opposed to the image on the left- the control version.

This assumption done before launching the variations is referred to as the 'hypothesis'. The variation you create will be based on this hypothesis to test it against the control. 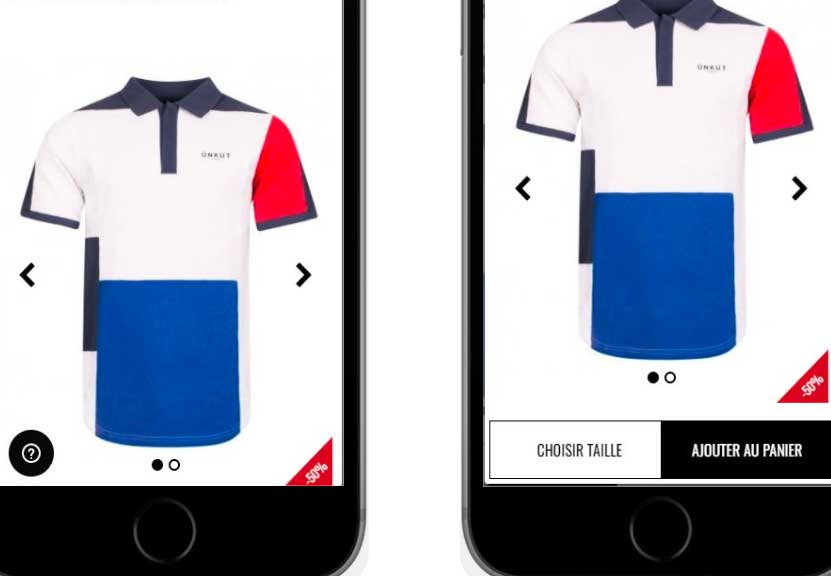 Thus, data will be gathered to prove or disprove this hypothesis and to conclude which one will improve your business metrics. In other words, you will be able to measure which set of users had a higher conversion rate with statistical significance depending on the page they were directed to.

Read more: A/B test case studies to give you some A/B test inspiration for your own website.

There are various types of A/B tests, which are chosen depending on your particular needs and goals:

A/B tests are based on statistical methods. Thus, it's important to understand which statistical approach to take to run an A/B test and draw the right conclusions to help you meet your business metrics.

Which statistical model should you choose?

There are generally two main approaches used by A/B testers when it comes to statistical significance: Frequentist and Bayesian tests.

In this sense, in a Frequentist approach, when you design an A/B test, you would pick on the winning variation based solely on results from that one experiment you ran. Whereas a Bayesian approach would take the information collected from previous experiments and combine it with the current data drawn from the new test you ran and draw a conclusion accordingly.

For a deeper understanding and for more on the differences between these two approaches, check out this Frequentist vs Bayesian article.

In order to analyze the results with a sufficient degree of statistical confidence, a threshold of 95% (corresponding to a p-value of 0.05) is generally adopted. The goal is to make sure you collect enough data to be able to confidently make predictions based on the results. In other words, make sure the web pages you're testing have high enough traffic.

Statistical significance indicates that the result is highly unlikely to have occurred randomly and is instead attributed to a specific cause or trend. It is the level of confidence (P) that the difference between the control and variation is not by chance.

This confidence level is obtained from a set of observations and represents the percentage that the same result will be obtained with different data in a similar future experiment.

Release only your best features with A/B testing

A/B testing is a great form of experimentation. A/B testing with feature flags is even better.

Feature flags are a software development tool that can be used to enable or disable functionality without deploying code. They have many uses, which we've already covered extensively. One such use-case is running experiments with A/B tests.

While A/B testing is typically used for front-end testing on your website or application, A/B testing can go deeper allowing you to also test your product features. Thus, A/B tests are good enough to test 'cosmetic' changes to your website but what happens when you want to test out back-end functionality and new features?

Enter A/B tests driven by feature flags. This means you can test out your functional features and then target users by dividing them into various segments. We will go into detail about server-side testing in the next section.

By delivering different, simultaneous versions of your feature to predetermined portions of traffic, you can observe and use the data extracted to determine which version is better.

Feature flags or toggles used in this way are also called experiment toggles. These are highly dynamic and are likely to remain in the code a few days or weeks, long enough to generate statistically significant results required for A/B tests.

Furthermore, one important distinction we must make is between client and server-side testing.

While client-side testing happens only at the level of the web browser so that you're constrained to testing visual or structural variants of your website, server-side testing occurs before HTML pages are even rendered by the user's browser.

Working server-side means you can run optimization campaigns on the backend architecture directly from within the coding. This has pretty huge consequences.

To keep in mind

Client-side testing places a cookie in your browser to identify you so when you go back to the site, it remembers who you are and shows you the same version of the site you saw the first time. In a world where the trend is to go cookie less, this can be challenging.

Performance is another issue.

Client-side testing relies on javascript snippets that need to be fetched from a third party provider and executed to apply modifications. This can lead to flickering, also called FOOC (Flash of Original Content) and can damage the user experience and the validity of the experiment. Read all about how to avoid the flickering effect.

Server-side testing, on the other hand, keeps track of all the users based on unique user ids you manage on the back-end the way you prefer (ex: user database for logged in users, session id of visits, or cookies as a last resort).

Soak testing is a type of performance and load test that evaluates how a software application handles a growing number of users for an extended period of time.

User acceptance testing (UAT) is used to verify whether a software meets business requirements and whether it’s ready for use by customers.