Feature flags have become a staple for software development teams to release features quickly and safely. Feature flags can be used for a wide range of purposes and are referred to in a number of ways from feature toggles to feature flippers but the core concept remains the same.

This guide will take you through the concept of feature flags, why and how they are used by teams today, their implementation and some of their pros and cons. 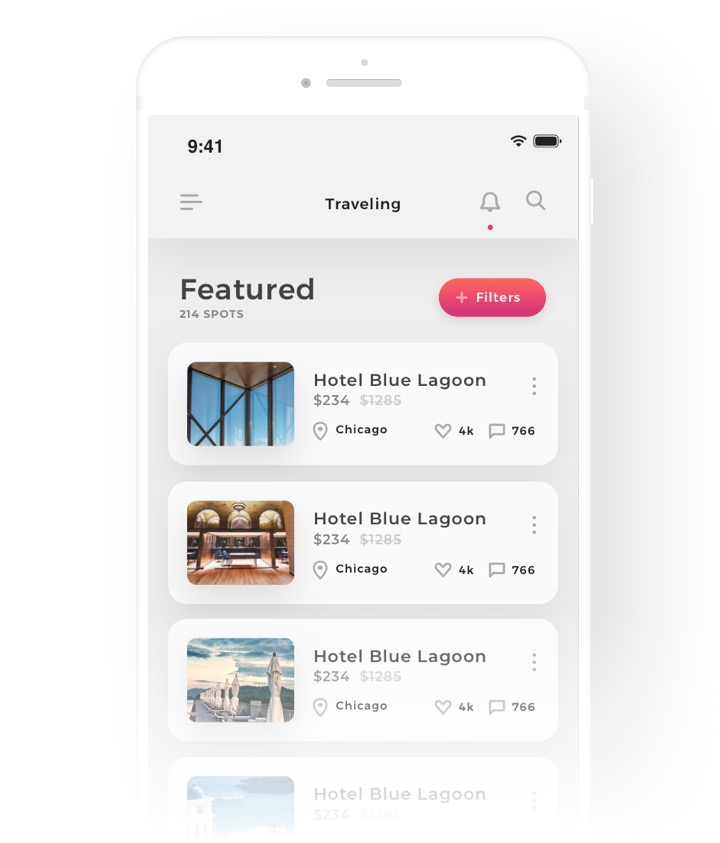 What are feature flags?

Feature flags are a software development tool whose purpose is to turn functionalities on or off in order to safely test in production by separating code deployment from feature release.

Thus, a feature flag ranges from a simple IF statement to more complex decision trees, which act upon different variables.

There are many types of feature flags, categorized based on their dynamism and longevity that serve different purposes. For example, feature flags may be short-lived to temporarily deploy new changes and test in production while other long-term flags, such as kill switches, remain in your system longer.

Why use feature flags?

Feature flags can be employed across a wide range of use-cases, from the most simple to more advanced uses as various teams such as engineering and production teams across organizations have begun to recognize their benefits in their software release strategy.

This will help you obtain valuable feedback from your most relevant users ensuring high-quality products.

Feature flags, then, allow you to A/B your features in real-world environments faster than ever before.
Progressive delivery
When you have a feature ready to be released, you control which subset of users have access to this feature through gradual rollouts of releases.

Read our guide to gradual rollout, which can help you achieve rapid releases in agile product development.

Progressive delivery can be implemented through techniques such as canary deployments or ring deployments.

Learn more about how you can use canary releases to ship with confidence.
User targeting
Feature flags give you the power to choose your users.

There are many methods to choose users with feature flags depending on your objectives.

For example, you can choose an ‘elite’ group of users for early access to a feature or you can ask them to voluntarily opt-in through beta testing. Some of the most widely-used techniques to progressively roll out your features through user segmentation include ring deployment, canary testing and dark launch.

Just as you give access to certain users, you can also block some users, for example, from a particular country or organization.
Kill switch
Sometimes, while testing in production, a feature may not be working as it should.

Feature flags can be used as a kill switch to disable these buggy features to turn it off for users until the issue is analyzed and fixed.

This comes in handy for ‘sunsetting’ features, which have been in your system for a long time and are no longer in use and so need to be retired to prevent the accumulation of technical debt.

There is no denying that feature flags have become a necessity when releasing new features rapidly and safely. Having an efficient feature management system can help streamline release processes.

The following is just some of the ways that they can bring value to your software development and release processes.

Feature flags enable continuous delivery
In that sense, feature flags allow teams to practice trunk-based development without the risk of long-lived branches and the dreaded merge hell.
Increase rate of product releases and engineering velocity
Feature flags allow you to continuously test in production without risks. This way, you can release your features much faster to your users and since you’re continuously validating your changes on a subset of users, you end up with higher-quality and less buggy releases.
Continuous experimentation
Feature flags allow you to frequently validate your changes by testing on a subset of users and measure performance based on the chosen KPIs.
Risk mitigation
By decoupling deployment from release and releasing to a small number of users to detect any bugs and if any issues arise during testing, you can simply turn off the feature flag in production by rolling back the buggy feature.

You can never have too much of a good thing and yet nothing is perfect. There are times when you may run into some pitfalls while using feature flags so while their use is encouraged and brings great benefit to your team’s workflow, proceed with caution, especially if you’re relying on an in-house feature flagging platform.

Complexity
With time and as use-cases evolve, using feature flags can become complex, especially as some organizations opt for an in-house system which can lack the level of sophistication necessary to support your products.
Messy code and coordination
The build up of feature flags in your system can lead to messy code over time. These conditional statements scattered in your code base can disrupt the flow of your system and multiple code paths make it hard to determine the cause of an issue when it comes time to de-bug.
Technical debt
If stale, unused flags remain in your system, this would eventually lead to the accumulation of technical debt so flags will need to be cleaned up once they are used and are no longer active.

The way software is developed has changed over time. Therefore, at the beginning of any software development process, teams and organizations must decide what methodology they will adopt to ensure high quality products. Waterfall and Agile are two of the most popular methods.

However, incorporating feature flags into your release are what differentiates an agile roadmap from a Waterfall roadmap, which helps you stay focused on your core user-alignment activities. Read more to find out why an Agile methodology is the right way to go for modern software development and why you need to incorporate feature flags into your agile roadmap to keep your products moving in the right direction.

When it comes to release management strategies, there are some strategies to choose from depending on your use-cases.

Use a standardized naming scheme
In the absence of a naming convention, people in your team could start naming flags with the same name and getting flags mixed up. This could result in your team activating the wrong flag leading to potential disruptions in your system.
Control access to flags
Set up logging to know which change was made by who-this is especially important to reduce dependency between product and engineering teams and better productivity as there will be greater transparency particularly when it comes to introducing new changes.
Manage different toggles differently
We have different types of flags so it would make no sense to, for example, manage and implement a release toggle and kill switch in the same way.
Conduct regular clean-up of your flags
You need to make sure that every now and then you are removing flags from your system that are no longer in use. Some flags are only meant to be short-lived and serve a one-time purpose so these need to be cleaned out of your system.

How to implement feature flags

A typical feature flag implementation is based on (1) a management service that defines the flag, (2) a run-time query to figure out the value of the flag, and (3) an if-else programming construct.

There are many ways to implement feature flags. The simplest and often the starting point is to use if/else statements directly in your code.

You can also rely on open source projects and many libraries are available for your prefered programming language. Here are some examples:

Before embarking on your feature flag implementation journey, it is important to consider the following:

Once you’ve decided you prefer to get a 3rd party solution, choosing the best feature flag management service to match your needs may prove to be a challenge. Visit our feature flag service comparison section to see how Flagship by AB Tasty stacks up against other solutions.

Flagship by AB Tasty may just be the solution you’re seeking, where it has been dubbed as a leader in the The Forrester New Wave™: Feature Management & Experimentation, Q2 2021 report. 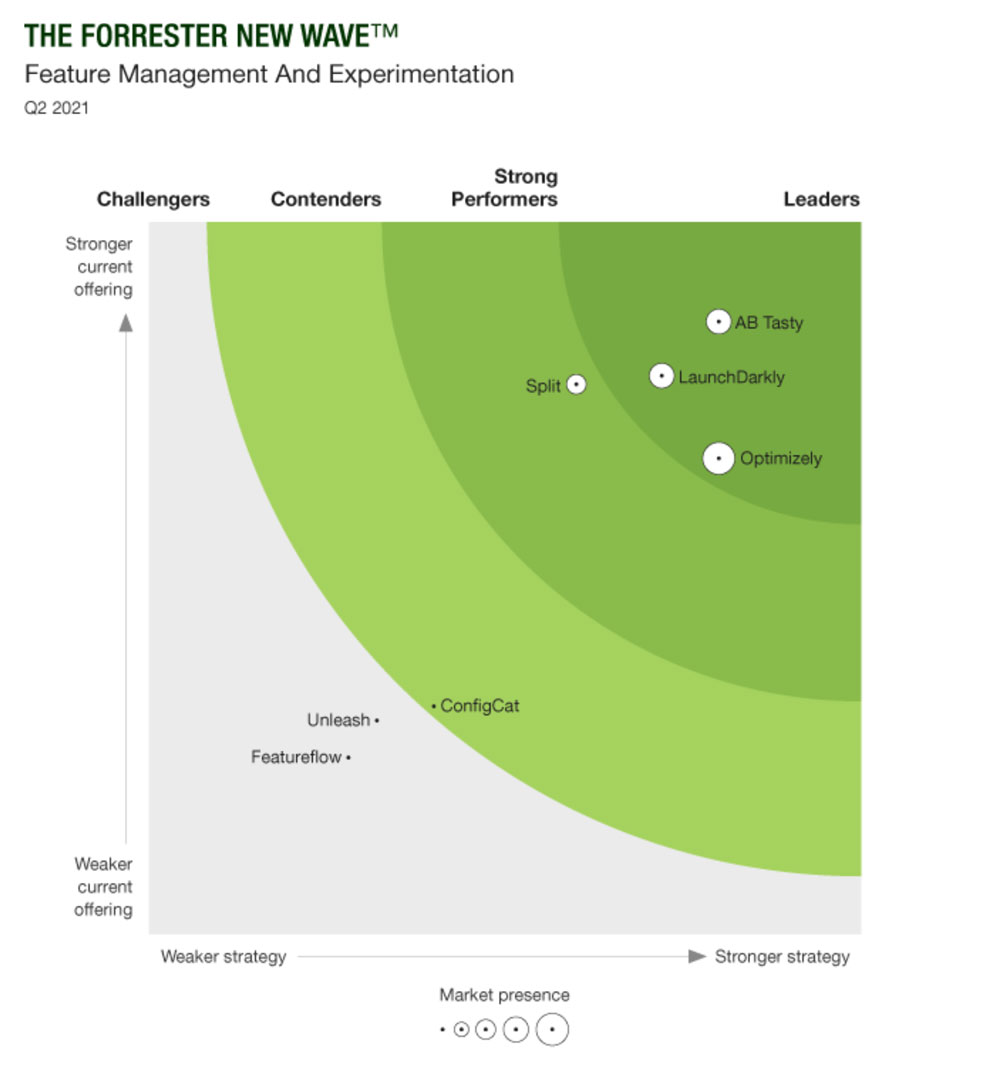 Flagship could be the tool you're missing to master your development cycles. Flagship not only allows you to turn features on and off but it gives you full control over your feature releases by wrapping your features in flags and rolling them out based on the specific flag values you assign to different user segments. You can then make informed decisions according to the metrics and KPIs you choose.

If you would like more information on getting started with Flagship, check out our documentation to help you get started using the platform.

Alternatively, you can also click here to start your free trial of Flagship by AB Tasty!

Feature branching sometimes is done using feature flags, especially when one developer is not yet finished with their changes but the release can still occur. Feature flippers would allow you to turn off these unfinished changes while completed features can still be released without delay.
Aren’t feature flags basically just AB Tests?
To a certain extent. Both help you ship more confidently. With an A/B test, you can run experiments and choose which version of your website to show to your visitors. However, you can also run A/B tests on features of your website using feature flags. Here, you can create two variations of your feature to a subset of users and then you can analyze how the user experience differs with the new feature.

With that said, A/B testing is not the only testing in production technique you can implement using feature flags,  so they can help you run A/B tests but their uses extend beyond that.
Should I develop my own feature flagging system?
The simplest answer would be it depends. It depends on your team’s capabilities as well as your resources and objectives. You may start off using feature flags as simple if/else statements but as you start to realize the many things they can do in a variety of contexts, the more it becomes difficult to manage all the different flags you have in your system.

Thus, as feature flag solutions become more mature, scaling becomes harder, especially if built in-house. In this case, you might want to opt-for a third-party solution. Read more to find out whether it’s best to build or buy your feature flag management tool depending where you are on the feature flag journey.

Learn why access control is an important best practice when it comes to feature flags.

Find out why naming conventions are one of the essential best practices when it comes to implementing feature flags.

How to Implement Feature Flags in Java

Let's see how to implement the feature flag pattern in Java using the Flagship.io Java SDK.

The Many Uses of Feature Flags to Control Your Releases

Learn about all the many different use cases for feature flags and find out when and why you can use them at your organization today.

How to Implement Feature Flags in a React JS App

The Journey of Feature Flag Implementation (Build vs. Buy)

Discover the journey to feature flag implementation across different use-cases and whether you should build or buy a feature flagging management system.

Get tips to prevent technical debt when using feature flags for software deployment.

Best practices around Feature Toggles and how to implement them properly to support continuous delivery.

One “beacon” that will keep your Agile product roadmap grounded, and your products moving in the right direction, is a simple function — the Feature Flag.

How Flagship Enriches the Lives of Tech Teams at AB Tasty

Learn how our tech teams 'drink our own champagne' when it comes to feature management and product optimization.